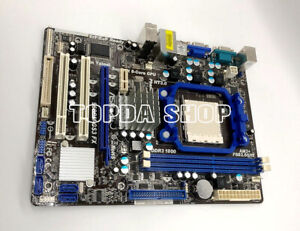 To avoid damaging the motherboard components due to static electricity, NEVER place your motherboard directly on the carpet or the like. Also remember to use a grounded wrist strap or touch a safety grounded object before you handle components.

Hold components by the edges and do not touch the ICs. Whenever you uninstall any component, place it on a grounded antistatic pad or in the bag that comes with the component.

Step 3. Position the CPU directly above the socket such that the CPU corner with the golden triangle matches the socket corner with a small triangle. Carefully insert the CPU into the socket until it fits in place. The CPU fits only in one correct orientation.

Step 4. The lever clicks on the side tab to indicate that it is locked.

For proper installation, please kindly refer to the instruction manuals of the CPU fan and the heatsink. Otherwise, it will operate at single channel mode. If you install only one memory module or two non-identical memory modules, it is unable to activate the Dual Channel Memory Technology. Step 1.

Before installing the expansion card, please make sure that the power supply is switched off or the power cord is unplugged. Please read the documentation of the expansion card and make necessary hardware settings for the card before you start the installation.

Remove the bracket facing the slot that you intend to use. Keep the screws for later use. Align the card connector with the slot and press firmly until the card is completely seated on the slot.

Fasten the card to the chassis with screws. Please refer to the following steps to set up a surround display environment: