And this month we continue exploring the G5's performance in a musical context. I really wanted to avoid starting this month's column by saying it's been a busy month for Apple, but it's been, well, a busy month for Apple. The Macworld show in San Francisco ushered in the 20th anniversary year of Macintosh, and if Apple's musical Apple Xserve G5 last year was in the distribution of music, it looks like this year's focus will also encompass the creation of it, with the first signs of Apple's strategy for purchasing Emagic towards the end of becoming Apple Xserve G5.

And while these announcements were Apple Xserve G5 welcome, it was curious that Jobs used a consumer show to present products that are Apple Xserve G5 aimed at the professional and server markets. Perhaps this was to compensate for the lack of any Power Mac or iMac revisions, especially since Jobs began his keynote by saying that it would be a great year for new products, indicating straight away that we wouldn't actually hear about any of these developments during the San Francisco keynote.

Xserve G5 The Xserve G5 is basically a server-orientated implementation of the technology used in Apple's Power Mac G5 desktop range of computers, and is available in three configurations: Like its G4-based predecessor, the Xserve G5 is housed in a 1U rack-mountable enclosure, despite speculation that Apple would not be able to provide suitable cooling for the G5 in such a small space. The way the engineers seem to have solved this problem is by jettisoning one of the original complement of four drive bays in favour of two ventilation holes.

It will be interesting Apple Xserve G5 see just how much noise the Xserve G5 machines actually produce in everyday usage. There was much speculation on the release of the original Xserve about its suitability as a music workstation; especially since Apple were keen to highlight the usefulness of Xserves, and, indeed, Xserve RAIDs Redundant Array of Inexpensive Disksin the video world.

And, of course, there's nothing to prevent you from using the PCI-X slots assuming you have a compatible audio card or the Firewire Apple Xserve G5 to connect suitable audio hardware. Far more interesting, however, is the use of an Xserve RAID for recording and playing back audio tracks, streaming samples, or both, which has Apple Xserve G5 mentioned in past Apple Notes columns. Round Two: EXS24 In last month's column we took a close look at the performance of the Power Mac G5 with the aid of Logic 's Platinumverb, but despite having more space than usual for Apple Notes, I didn't get to describe the second part of my performance tests, based on the Apple Xserve G5 of Logic 's EXS So now it's time to put the white coats back on again, as we answer the question that I'm sure you lose as much sleep over as I do: And while I'm recapping, it's worth remembering the Emagic co-founder's comments during the keynote that introduced the G5 at Apple's WWDC last May, where he claimed the G5 could play back over stereo bit voices.

Was he Apple Xserve G5 And am I going to end every paragraph with a question? I used the built-in Core Audio drivers with a buffer size of samples and initially disabled the EXS24 's Virtual Memory disk streaming option so the performance of the disk and controller wouldn't impede the processor and system buss's capabilities. In Logic 's Arrange window I created a one-bar object that looped indefinitely with a note cluster over the first quarter-note beat, adjusting the tempo of the song Apple Xserve G5 the EXS24 's voice indicator reported that 64 stereo voices were playing back continuously.

With 11 instances of EXS24 working flat-out in the same configuration as described Apple Xserve G5 the last paragraph, the first and second CPU meters in Logic showed approximately 95 and percent usage respectively; the User value from OS X's Activity Monitor reported 88 percent. Adding a 12th instance overloaded the system, but even with 11 instances of EXS24, each playing back Apple Xserve G5 voices, the total number of stereo voices waswhich is pretty impressive.

While the booth was really an Emagic one in all but name, this year saw the largest and most significant Apple presence at a professional music trade show, and the company took the opportunity to show off both the G5 Power Mac and G4 Powerbook hardware, along with software such as the recently-announced Garage Band, Soundtrack and, of course, Logic. The biggest Apple news at NAMM, however, was the price and name restructuring of the Logic range Apple Xserve G5 be in line with the company's Final Cut video software.

Emagic's three-tiered Audio, Gold and Platinum line-up of Logic software will be replaced by two versions: While Logic Pro might initially seem more expensive than Logic Platinum, Apple will now bundle every optional instrument and effect with Logic Pro at no extra charge. Those who have used Logic since day one probably won't feel too annoyed with the new pricing structure since they will Apple Xserve G5 have benefited from Emagic's effects and instruments over the last four years, although those who have made recent purchases may be less forgiving. 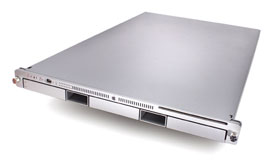 However, there are perhaps serious implications for the industry proceeding from Apple's actions, since the company is arguably eroding the value of software by literally giving much of it away. This bundling could possibly harm plug-in developers in the short term.

How many Logic Pro users will purchase Altiverb when they already get Space Designer for free, for example? Logic 's aggressive pricing could also have implications for other sequencer manufacturers, whom I imagine will struggle to match Apple's pricing in the professional space of the Apple Xserve G5.

Can Steinberg afford to sell all their products in one box for less than the Apple Xserve G5 retail price of Nuendo? The only reason Apple can position Logic in this way is that Logic users will be locked into purchasing Macintosh hardware, which is where Apple make their profit — Apple is a hardware company, after all — so the software merely becomes a way of selling more hardware. Not that this is a bad thing if you happen to be a Logic user already, or if you happen to like Logic; but it could mean less third-party development in the future for the Mac platform, which I think would not be a good thing.

A clear parallel to this can already be seen in the video world, with Adobe no longer developing Premiere for the Mac because of the market penetration of Final Cut Apple Xserve G5.